Zulqarnain Sikandar is a good looking and a talented Tik Tok star and Vlogger, who has received immense popularity and love within a short span of time.

His videos are proof of his bright future that surely will be in the Pakistani Showbiz Industry.

Hailing from Gujarat, Sikandar’s good looks and killer smile is enough to let everyone fall for him.

Zulqarnain Sikandar Career
It all started in 2018 when he began to make videos on the Tiktok along with his friends. His substantial and significant expression forced people to become his fans.

Today Zulqarnain is being recognized by every single person in Pakistan and his popularity is enlarging with each passing day.

Soon he is going to be seen in a short Pakistani film with the title ‘Baba Ji ki Booti’ alongside other TikTokers Jannat Mirza and Alishba Anjum.

Earlier, TikToker Zulqarnain Sikander had come under fire for appearing in a fairness cream advertisement.

Using skin-whitening creams is considered a norm among women in Pakistan and that’s exactly what’s wrong about our racist culture.

Colorism is a disease and fairness cream brands have a huge part to play in spreading it.

However, netizens called out the 22-year-old star for supporting tone-deaf campaigns that silently breed low self-esteem in large batches.

Pehli Si Mohabbat became one of the most anticipated dramas of 2021 when it was announced that Maya Ali and Sheheryar Munawar will be playing the leading characters in the drama. Written by Faiza Iftikhar and directed by Anjum Shehzad, the drama has already got all the eyes on it. Both Maya Ali and Sheheryar…

Sanam Jung is a spectacular and versatile Pakistani television artist who is known for hosting the show “Jago Pakistan Jago” for a long time. She is a considerable Television actress who has been seen in a few serials, yet those few serials became the most substantial hit of all time. Sanam got married to her… 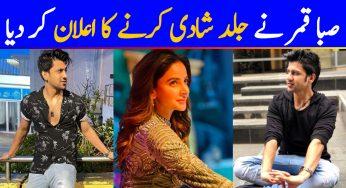 Saba Qamar has once again become the talk of the town after she shared a gorgeous picture in a stunning pastel backless gown with the caption ‘If it’s meant to be, it will be.’ Under those pictures, Azeem commented, “Let’s get married? This year.” To which, Saba responded, “Qubool hai.” Her response sent social media…

Who doesn’t know Mufti Abdul Qavi, the famous cleric who was propelled into the limelight instantly after his selfie and video with the late social media sensation, Qandeel Baloch, went viral. Although Mufti Qavi’ involvement in Qandeel’s murder case still remains unclear and unanswered, the cleric has found the formula to stay in news, with…