Some new Pakistani dramas recently started, few of which are promising. There are many other new dramas in the pipeline which will surely be worth your time. These upcoming dramas are likely to be hit because of the names associated with them. There are some actors in particular who make sure that they only work in the best dramas. Other than that, there are also two sequels of popular dramas in the pipeline which makes them a must-watch.

This list contains the names and details about all those upcoming new Pakistani dramas which are worth waiting for.

Mushq is the most awaited drama for many reasons. It will be Imran Ashraf’s comeback on television as a writer. Imran Ashraf is really excited about this project because he hasn’t just written the script but will also be playing the lead in it. Imran Ashraf has proved himself as an outstanding performer time and again. Apart from this, big names like Kubra Khan and Goher Rasheed will also be seen playing leading roles in the drama.

The news is that Urwa Hocane too will be making an appearance on television after a long time in Mushq. Mushq is being produced by MD Productions and Ahson Talish will be directing it. Ahson Talish and MD Productions have given the viewers many hit dramas in the recent past. Alif Allah aur Insan, Suno Chanda and Yeh Dil Mera are their recent projects together.

Imran Ashraf’s first drama as a writer Tabeer was also directed by Ahson Talish. Mushq promises to be a love story more than anything else. Imran Ashraf and Urwa Hocane will be the main leads in the drama.

Recently there was an announcement that Geo was once again coming up with the third season of the drama. Since the first two seasons were such a massive success, we are pretty sure the makers of this serial once again will give the viewers something exciting to watch.

Iqra Aziz and Feroze Khan will be playing the leading roles in Khuda aur Mohabbat 3. Iqra Aziz recently won the viewers over by giving outstanding performances in two different dramas. Her performances in Suno Chanda and Ranjha Ranjha Kardi were loved by the viewers.

Feroze Khan’s mind-blowing performance in Khaani was appreciated by the viewers and critics. Both these actors have proved that they can give powerful performances in layered roles. This is the first time that they will seen sharing screen space.

The shooting for season 3 has started. Director Syed Wajahat Hussain who recently directed drama serials Do Bol and Yaariyan will be directing this one. 7th Sky Entertainment is going to be heading this project unlike the last time when Babar Javed produced the series.

Prem Gali is another drama which should be on everyone’s must-watch list for multiple reasons. Drama serial Prem Gali is going to be Aangan’s sequel. Aangan on ARY Digital provided the viewers with the perfect family entertainment. Prem Gali will have some of the old characters and few new ones but the central theme will more or less be the same. This script is really close to Faiza iftikhar’s heart, it has been directed by the same director who was behind Aangan i.e Qasim Ali Mureed.

This drama has been produced by Six Sigma Plus. Farhan Saeed and Sohai Ali Abro are the latest addition in this sequel. They will be playing the leading roles in the drama. Apart from this, Anoushey Abbasi will also be seen in the drama.

The cast members are really excited about this project. The shooting of the project started few months back and it should be on air soon. The number one reason why most people are looking forward to this one is that it is the sequel of a drama that won them over completely.

Bandhay Ek Dor Se is another new Pakistani drama which most drama fans are waiting for. The drama has a great star cast such as Ahsan Khan, Ushna Shah and Hina Altaf. Veteran actors like Samina Ahmed, Saba Hamid, Saba Faisal and Qawwi Khan are also part of this drama. Bandhay Ek Dor Se’s script has been written by ace writer Faiza Iftikhar. Ali Faizan Anchan has directed this drama.

In an interview Ahsan Khan shared that although this is going to be a family drama, it will not be typical in any way. The drama will cover the story of a Punjabi family, the members of which fight and argue but at the end of the day, they love each other. Bandhay Ek Dor Se will be airing on Geo.

Noman Ijaz and Savera Nadeem are everyone’s favorite for obvious reasons. Every time they have been seen in a drama together, they have left the viewers in awe of their brilliant acting skills. The good news for all the fans out there is that they are doing another drama together. Noman Ijaz shared a BTS picture from this project. Bilal Abbas Khan is also going to be a part of this project. This drama is going to be directed by Anjum Shehzad, the man behind the blockbuster Khaani.

The few pictures from the sets which were shared by Bilal Abbas Khan and Noman Ijaz definitely are intriguing. The background and their get-ups suggest that these might be scenes from inside a prison. The captions with these pictures show the excitement of the actors involved in the project.

Sonya Hussyn has been dropping hints about her character in the upcoming drama which will be airing on HUM. Sonya Hussyn will be part of yet another project that according to her serves a bigger purpose. Lately, she has made it clear that she wants to portray the characters of strong women on-screen.

Sonya Hussyn’s acting skills were appreciated by one and all in all her recent dramas. Her choice of projects recently has also grabbed people’s attention. Sonya will be playing the difficult role of someone who is schizophrenic. She believes that mental illnesses are considered tabooed in our society and her upcoming drama will help spread awareness about it.

6 Pakistani Dramas That Were a Major Disappointment Pakistani drama industry has recently been thriving. But every now or then, it also has its fair share of snooze fests. There are some shows that just don’t sit well with the audience. These shows can have beloved celebrities, a huge budget, and well-calculated marketing strategies, and…

Some actresses in the Pakistani drama and film industry really do make it look like age is just a number. When you look at the pictures of these celebrities from ten years ago you are fully convinced that they have just attained a better sense of style and look better with age. They are still…

Ever since Turkish series Ertugrul started airing on PTV, there has been a massive craze of Turkish drama following in the country. However, we cannot attribute this to PTV alone as before PTV, channel Urdu 1 had done the deed of having Turkish dramas dubbed in Urdu and airing on the channel some years ago….

Ohkay so, this was a hit & a miss episode of Ye Dil Mera. Where some of the scenes were good, the other failed to leave an impact. Half the time, this episode covered what the viewers already know & have memorized. The only new or unseen scenes were very few like Amaan’s interactions with… 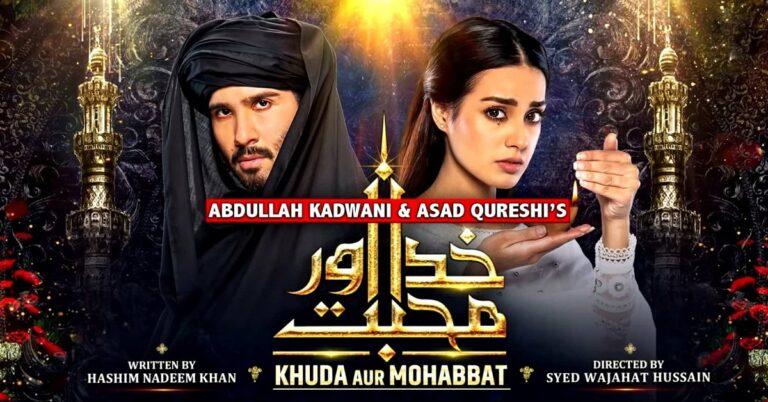 Ohkay so, the writing of Hashim Nadeem Khan, the direction of Syed Wajahat Hussain & production of 7th Sky Entertainment; Khuda Aur Mohabbat 3, a highly anticipated drama of recent times began last night. The very first episode made it obvious that this season is going to be very different from the previous seasons, however, it will have a…